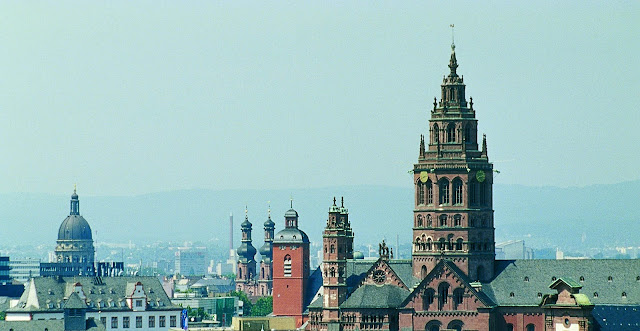 
The first trilateral French-German-Russian workshop on asymptotic analysis and spectral theory on non-compact structures (Aspect'12) will take place on September 10-12, 2012, at the Johannes Gutenberg University in Mainz, Germany. The meeting should mostly focus on selected topics of common interests of the participating teams. These topics include: operator-theoretical tools in the spectral analysis, Schrödinger operators on non-compact manifolds, waveguides, scattering systems, periodic differential operators, homogenisation techniques.

The meeting is organised by Denis Borisov (web), Vadim Kostrykin (web) and Konstantin Pankrashkin (web) and is sponsored through the trilateral conference support program by the Deutsche Forschungsgemeinschaft (web), CNRS (web), and the Russian Foundation for Basic Research (web).

The second edition is being organized in Orsay (France): http://aspect15.blogspot.com

Mainz (google map, wikipedia) is a city of about 200.000 inhabitants, the capital of the German federal state Rhineland-Palatinate, situated in the south-western part of Germany at 150 km from the borders between Germany, France and Luxembourg and at about 30 km from Frankfurt/Main.

The main railway station of Mainz (Mainz Hauptbahnhof or simply Mainz Hbf) has a direct train service to most German cities and is easily accessible from the Frankfurt International Airoport and the Frankfurt main railway station by the local "S-Bahn" train service S8 (duration 30 minutes, departs every 15-20 minutes) and some regional trains: transport map. Note for French participants: there are direct TGV trains Paris-Frankfurt and Lyon-Frankfurt.

Learn more on the access to Mainz and to the university campus on the dedicated page of the Mainz university.